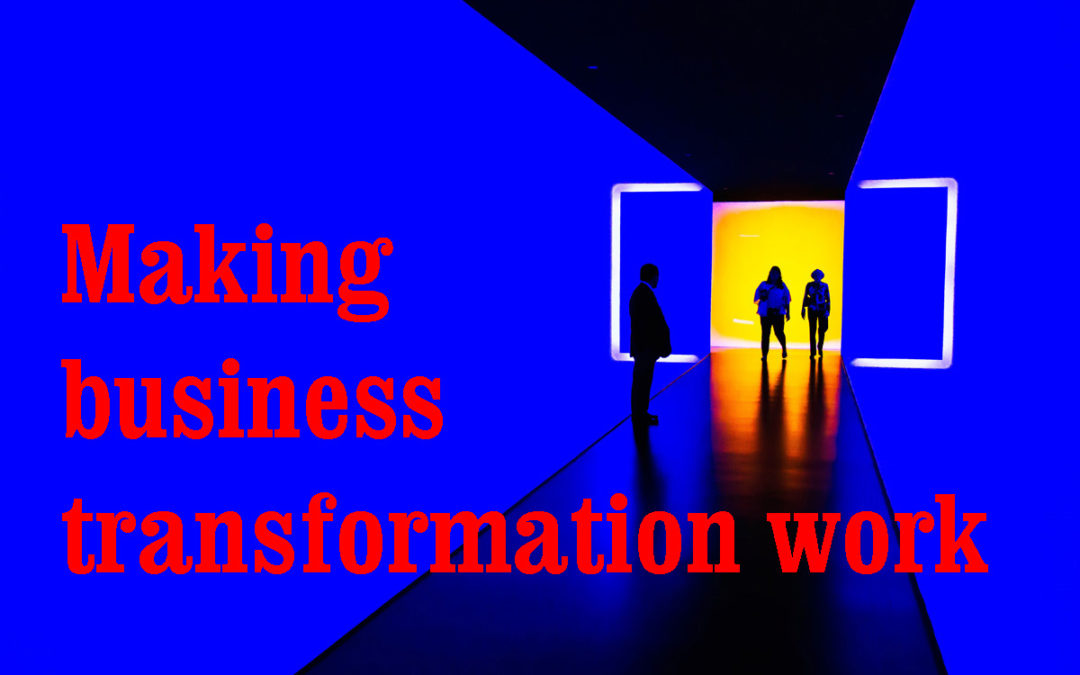 Go on, I dare you. Look at the articles that come up when you search for “Making business transformation work” and they all have one thing in common. None (yes NONE) of them pay attention to the fundamental question of why an organisation should be undertaking a transformation programme in the first place. Instead you will see lots of big corporate speak or heavyweights from the consulting world putting across points about why getting transformation right is so important.

So – if they are so clever – why is it that repeatedly we hear things like this?

“Research in 2004, conducted by the Royal Academy of Engineering, showed that as few as 25% of all major business projects in the UK actually delivered their stated benefits.”

“Transformation and change is a critical issue for most organisations. Research shows that [with] the failure rate of change programmes at 70-80%, many organisations are struggling.”

“According to a report […] only around 16 percent of IT projects can be considered truly successful with the cost of failure for businesses across the EU estimated at being into tens of billions of pounds.”

The answer lies in an assumption. The assumption is that most organisations know what it is they are trying to do in the first place.

More important perhaps is knowing WHY that is the case? WHY should they be trying to achieve X or Y? It gets even more important with small and medium businesses who simply cannot afford to throw resources at the wrong things. Yet SMEs have an agility that is denied to the big corporates and so, if they follow the logic that ensues from doing things right first time, they can outmanœuvre them.

Surprising though it may sound, none of the so-called gurus in this space even attempt to answer that question. Small wonder then that business transformations fail to deliver on an epic scale. Yet the consulting fees continue to be paid and organisations struggle along somehow.

My take on this is that there has to be a better way.

Business leaders frequently believe they know what needs fixing. That may be as a result of dialogue or perhaps they have seen what competitors are doing. Are you sure you haven’t fallen into the same trap? Also beware of the pitfalls of a “me too” approach in making business transformation work. For one thing a high percentage of those other transformations are going to fail (we’ve just seen that research has already pointed this out) and therefore we should be critical of any assumptions.

Instead the really clever guys are those who take nothing at face value. They dig deep to find out what is really going wrong and what the root causes are. Believe me when I tell you that big corporate is really bad at doing this. Public sector organisations are even worse – as you can see below. So here is real opportunity for the SME player to steal a march first time and, as the saying goes, to kick some ass.

Some Case Studies in How Not To …

If you have read this far then no doubt you have a real interest in what will make your business transformation work. Bear with me while I take you through a couple of really high-profile instances of where things went horribly wrong. There are some really good lessons to be learned from these very public and hugely costly mistakes.

By now everyone knows about BREXIT and the convoluted attempt to remove the United Kingdom from Membership of the European Union. It really doesn’t matter what your views on the actualities are, it’s the process and the consequences we should look at.

This was to be a business transformation on a grand scale. Taking an entire economy out of the world’s biggest trading bloc isn’t something that should be taken lightly. It has consequences on the lives of 10s of millions of people and countless businesses, travel arrangements and goodness knows what else.

However in business transformation terms it was and remains an utter disaster. WHY? Because the fundamental basis on which it was built was fatally flawed. In the run-up to the UK General Election in 2015, the then Prime Minister, David Cameron thought that simply by including a promise in his party manifesto to hold a Referendum during the following Parliament on whether the UK should stay in the EU was the answer to a problem.

Sadly he hadn’t thought it through and hindsight shows that the underlying problem had nothing to do with the rights and wrongs of the UK’s participation in the EU. It had everything to do with a substantial minority of backbench MPS who sniped at Government policy and wouldn’t follow the Conservative Party line. Without this minority group onside the day-to-day running of the UK Government was being undermined, especially in an era where their majority in Parliament was wafer thin. (Let’s not forget that in the preceding 5 years they had actually been in coalition because they didn’t have a majority.)

So the solution (a Referendum) was devised on an assumption that (a) Prime Minister Cameron would win the outcome; and (b) having a definitive answer from the British people would shut up his rebellious minority backbenchers.

Just think about that. The leader of the 5th largest economy in the world based the future of that economy on an assumption that a proposed quick solution would result in a business transformation for his own party. No digging to find the real root cause of the dissent. No investigation to find out if what was being touted about the consequences of being part of the EU was right or wrong. No attempts to have a dialogue with anyone – let alone the voters!

And the cost? That is literally beyond calculation. The downstream effects will be felt for decades and nobody has any idea of what they are likely to be. It will probably be judged by future historians as an epic failure of government driven by hubris and a lack of diligence. Also the minority group still hasn’t been dealt with properly and will no doubt return to wreak further havoc on party politics. Talk about the tail wagging the dog!

It is no secret that the Government of Indonesia is seeking to relocate its capital from Jakarta to somewhere inland and well above sea-level. They are not the first government in the world to relocate a capital city. Nigeria and Brazil spring to mind as other examples. But why is this a business transformation and why is it necessary?

The answer given is that Jakarta is sinking into the sea at an alarming rate. Experts all agree that the immediate cause is that too much ground water is being pumped up from the aquifers and therefore the ground above is sinking.

That’s not an assumption. It is a symptom. But of what?

Well it doesn’t take a genius to work out that too many people living at sea level and needing drinking water have to get it from somewhere. So why is it that they are pumping it up from underground and drowning their city as a consequence?

The answer is likely to be that the authorities simply refused to invest in adequate provision from sustainable sources that weren’t going to have this dreadful impact. Why was that? Was nobody prepared to invest in desalination? (The Israelis have been doing it successfully for years.) Again, why was that? What is the cost of relocating a capital city that will still need massive amounts of fresh water wherever it is located? How does that compare to the historic costs of desalination plants that would have been sufficient to have served the entire needs of Jakarta over the last 30 years?

So here again we see a business transformation that is now having to be dealt with as an emergency and at huge cost, when proper analysis of root cause could have delivered a much cheaper solution and done so decades earlier.

Thinking about your own (relatively small) organisation how often are the leaders guilty of the same kind of mistakes?

If you want to discuss ideas on how to prevent this happening then book in a call.

The Magic of Questions

There is something endearing about the way that small children repeatedly ask WHY? Yet somehow as adults we have forgotten how easy that can be. My response to that is to become more naïve in approaching problems and stop the assumptions dead in their tracks. The reason is simple – it works. And when you have the answer to those simple questions, building a business transformation that works is so much easier to accomplish.

Things YOU Should Know and Do

Let me share one simple fact. In over 40 years I never came across an organisation that actually understood what their problems really were BEFORE they launched into some form of business transformation. Your guess is as good as mine as to WHY that should be. Sadly the consequence is a lot of wasted resource before they finally get somewhere close to being on track. So do something very obvious but quite humbling. Get your people to dig for the causes and get right to the heart of it all.

It would be foolish in the extreme to assume that you or anyone else knows the answer right up front.

The other thing that you should know is that by doing the above you will engage a sufficient group of people who can form the kernel of a business transformation. You cannot do this as a lone voice – you need people who understand and agree with the way forward. They can then help maintain the momentum and life becomes a lot easier for everyone.

Don’t Assume the Strategy is Everything

Some other advisers will point to the Business Strategy as being the guiding light for a transformation to occur. However that assumes that said strategy has been properly founded and has asked the same sorts of fundamental questions. Believe me when I say that (a) organisations seldom rewrite their strategy; and (b) when they do they don’t go right back to the roots. So the chances are extraordinarily high that just following the corporate strategy is going to result in the wrong basis for a business transformation. Ask yourself when was the last time YOUR organisation went through a comprehensive strategy exercise?

Go back to basics. They work better and, interestingly, more people will engage once they start to see the logic of how things are being developed.

The various transformation models and other (technical) stuff around things like Digital Transformation or engaging with people is part of the solution. It is NEVER the rationale. So don’t get caught up in the hype – step back and find out what your problems really are. It’s like treating an illness – if they don’t know what it is then the doctors will prescribe broad spectrum antibiotics that may be ineffective when what is needed is a very specific treatment that gets right to the heart of things. Modern medicine is crystal clear that broad spectrum approaches are generally a bad thing and a waste of precious resource. Your business transformation problems are equally deserving of detailed pathological investigation.

Using a different analogy, as a very wise man once said you can never navigate successfully to a destination if you don’t know where you are to begin with. Making a business transformation work starts out by knowing exactly what your problems are – not just their symptoms. In business there’s no GPS to rely on to tell us where we are to begin with.

We have a strong track record of results on business transformation, and we can help you start unlocking value that matters for your organisation. Contact us to get the conversation started.